Have you ever noticed this statue, in the park by the lake in downtown Pogradec? Lasgush Poradeci is one of Albania’s greatest writers. He so strongly identified with his hometown, he adopted the pen name of Lasgush Poradeci—Llazar Gusho of Pogradec. His poetry, peerless in the Albanian language in music and meaning, is almost impossible to translate. In fact, only five of his poems have been translated into English.

Poradeci was born Llazar Sotir Gusho in 1899 in Pogradec, when Albania was still part of the Ottoman Empire. He studied in Athens, Bucharest, and Graz, earning a doctorate in Romano-German philology there in 1933. In the 1930s he was part of a circle of Albanian expatriate intellectuals who worked to build a distinctively Albanian language, literary tradition, and history. In 1935 he returned to Albania to help develop the education system. He taught both literature and art until the Communist regime took power in 1945.

The Communist regime in Albania was not kind to artists and intellectuals. Poradeci was under constant, malicious surveillance during his lifetime, and was consigned to make his living as a translator, paid by the page. In those days, almost everybody lived in poverty. Poradeci’s daughters recall that he had only one suit of clothes to wear.

Poradeci divided his time between Tirana and Pogradec. He was widely respected in Pogradec, even in his many years of silence. Under Communism, “comrade” was the preferred form of address, reflecting a mindset that made everyone the same as everyone else. But Lasgush Poradeci responded only to the older honorific “mister” [“zoti Llazar” in Albanian]—an insistence on individual dignity that his hometown honored.

To protect his family, he lived as a recluse, in silence and separation from the watchful eyes and ears of others. His family even avoided other people while relaxing on the shores of Lake Ohrid. And he published no more poetry under the Communist regime. His only creative outlet was his diary—and he wrote that in a mix of Sanskrit and Greek because he knew those languages would confound his observers.

In retaliation, they tried to take his pet dog, Cuci (at the poet’s side in the statue shown above). According to his daughter, when they couldn’t get to Poradeci any other way, the local Communist party rounded up all the pets in the neighborhood, intending to kill them. Poradeci appealed to the highest reaches of government to get little Cuci back. On the third day, the party relented. 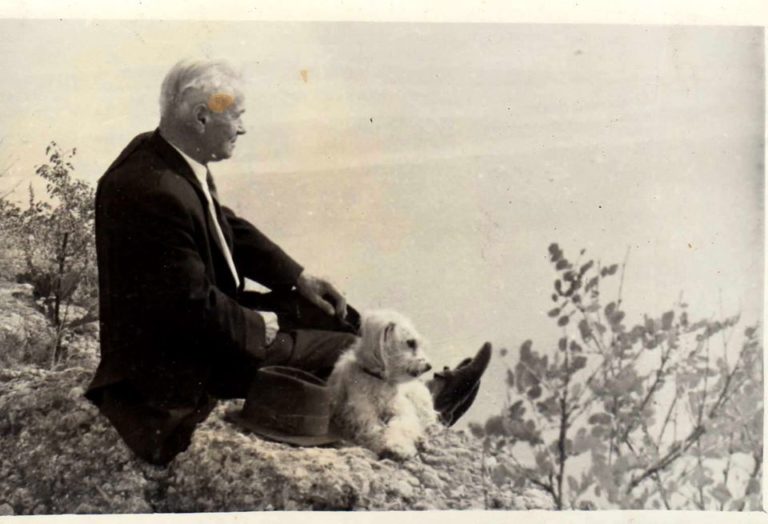 Lasgush Poradeci died in poverty in 1987, years after he disappeared from the awareness of most Albanians. He was buried in his beloved hometown. Now, when you visit Pogradec, you will find his words and image throughout the public spaces he loved.

There are still people in Pogradec who remember him, and have a story. The author of this article is a Pogradec native, and she has one. Her father was a boy in the mid-1960s. One day he was hanging out on the concrete wall near the shore of the lake with his friends, looking towards the town. They saw Poradeci, and greeted him enthusiastically.

“Greetings, boys,” he responded. “Where are you from?”

They looked at him, confused. Pogradec is not a big city, and he knew perfectly well who they were. “We’re from here,” they said ["Poradecarë jemi zoti Llazar" in Albanian. ]

With a hint of a smile, Poradeci nodded and said “No true native of Pogradec turns his back on Lake Ohrid!”

Engjellushe Icka is a Pogradec native with roots that go back many generations Ms. Icka has an MA and MBA in business management from the Economic Faculty of the University of Tirana, and she has been a lecturer in Management at Nehemiah Gateway University since 2015. Her father was the noted teacher and woodcarving artist Llazi Icka. She combines a passion for study with a lifetime of personal knowledge of this city by the lake.