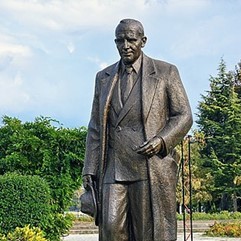 When you stop at the city center park in Pogradec, with its lush rose garden, you will see the statue of Lasgush Poradeci looking toward Dry Mountain, ready for a conversation with his friend and fellow author, Mitrush Kuteli. Kuteli has removed his hat in greeting. He has his last book of poems in his pocket, and is ready to share the verses with his friend Lasgush and hear his thoughts.

Mitrush Kuteli, born Dhimitër Pasko, uniquely combined prominence as an economist and a literary figure, equal parts poet, translator, critic, storyteller and folklorist. The Albanian scholar Behar Gjoka says of him that „When Kuteli wrote about economic issues he was tremendously rational, but when he wrote literature he played with the word, making his phrases perfect; simple and modern“. He left to the readers a trove of prose and poems inspired by Albanian folk traditions and his own experience and feelings.

Kuteli was born in Pogradec in 13 September 1907. His father opened the first Albanian-language bookshop in town. Kuteli published his first verses while still in school in Pogradec. He went to college in Thessaloniki and later moved to Bucharest, where he graduated in 1934 with a PhD in economics.

While in Bucharest he wrote for the Albanian-language weekly newspaper Shqipëri' e re (New Albania), published in Constanza from 1928 until 1933. In 1937 he organized publication of Lasgush Poradeci's masterpiece, Ylli i zemrës (The Star of the Heart). Concurrently, from 1934-1942 he was a high official of the Romanian Ministry of Economy and later on he was the director of the Cernăuți Bank. 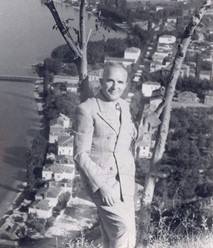 Kuteli returned to Albania in 1942. During the war years, he self-published most of his major works in Albania. By the end of the war, he was not only a founding member of the Albanian Writers’ Union, but also an executive at the Albanian State Bank.

In 1947, Kuteli, in his capacity as a government official, opposed a proposed customs and monetary union between Yugoslavia and Albania. He was forced to resign his job at the bank, and was subsequently sentenced to five years of hard labor at a camp near Korca, where work and living conditions were unspeakably harsh. During his imprisonment, his literary works were lost and his personal library was confiscated.

In 1949, Kuteli was released from prison. Post-prison, the only work available to Kuteli was as a translator of literature from Russian (which he had learned in prison), Romanian, and Spanish into Albanian. His PhD in Economics would not be recognized until the very end of his life. Mitrush Kuteli, a lifelong Christian, died in the age of 60 in the year 1967, in the same year when the practice of religion was banned in Albania.

As a reader and Pogradec native, I am most grateful for his 1944 collection „Këngë dhe britma nga qyteti i djegur“ (Songs and cries from the burnt city). During World War II, Kuteli was present during the surrender of Pogradec to the Germans. He collected in one volume the folk songs of the Pogradec region . He included the name and background of each of his (in many cases quite old) narrators, including how they inherited these songs from their grandparents. I was first introduced to this book as a child because my great-grandfather’s sister is one of the narrators.

You can read more about Mitrush Kuteli, including translations of his poetry and prose, on the website of the late Robert Elsie, scholar and translator of Albanian literature. http://www.albanianliterature.net/authors/classical/kuteli/kuteli_poetry.html