This the greeting of Orthodox Easter (traditionally called "Pascha") as we celebrate it each spring in Pogradec. It sometimes feels like Easter involves everybody in town: ladies preparing mountains of traditional foods, men shopping for the best ingredients, children enjoying every element of the celebration, and grandmothers sternly reminding everybody of the prayers and fasting rules.

Christianity was brought to Albania by the Apostle Paul during his second trip, as documented in the New Testament, 2nd Letter of Paul to Timothy and Romans.The origin of Orthodox Easter dates back to this ancient period and celebrates the resurrection of Jesus three days after his death. It is the culmination of the Passion of Jesus, preceded by Lent (or Great Lent), a 40-day period of fasting, prayer, almsgiving, and penance.

Easter and its related holidays do not fall on a fixed date; dates are computed based on a lunisolar calendar (solar year plus Moon phase) similar to the Hebrew calendar. Orthodox Easter is on the first Sunday after the full moon that occurs on or after the spring equinox (21st of March). If the full moon falls on a Sunday then Easter is the next Sunday.

This year Orthodox Easter celebrations will take place on the 24th of April. As per tradition our grandmothers and mothers prepare delicious, yeastless Easter breads made with flour and chickpeas and prepared in beautiful shapes. Easter bread is shared among family members and also distributed to others during Easter lunch. 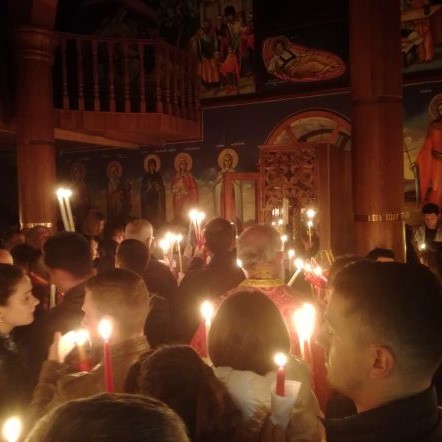 In the Orthodox tradition, Easter Sunday starts with the midnight Resurrection Liturgy, when everyone greets one another with the greeting “Christ is risen!“ (Krishti u ngjall!) and the response is „Truly He is risen!“ (Vertet u ngjall!). At the church, liturgies continue through the night, followed by a morning and an afternoon service. The festive Easter lunch takes place at midday.

Red eggs are an important symbol of Orthodox Easter. The brilliant red dye represents the blood of Christ. The hard shell of the egg represents the sealed Tomb of Jesus, from which He emerged following Resurrection. The eggs are hard boiled, and then dyed red and decorated beautifully.

As part of the greeting at the afternoon liturgy on Easter Sunday, the children are first to knock these red eggs together. During the communist regime, when religion was forbidden by the state, Pogradec families used to follow the traditions of Orthodox Easter in secret. After the fall of the Communist regime, when religion and celebrations were again allowed, red eggs started to fill the hands and pockets of everybody in town. My Muslim friends would remind me days in advance to prepare the nicest Easter egg for them, because it is considered as a good omen that brings, peace, health and harmony in their families too.

Young boys seem to get the most joy out of the tradition of the red eggs, turning the tapping of two eggs into a contest to see who can break the others' eggs first, and then bragging about the total number of eggs they broke. In the years before religion was outlawed, some boys each year would make and dye wooden eggs for the occasion to assure victory in all battles.

It seemed like this tradition was forgotten during the Communist years. But people don’t forget so easily. I still remember the first Easter after the fall of Communism in 1991. When children started to knock the eggs after the liturgy in the church yard, I saw two boys, confident in the strength of their egg-breaking technique, smash their beautiful red eggs together. Instead of at least one of them breaking, a loud wooden thunk sounded. Instructed by their fathers, each had prepared a wooden egg, and it happened that they met each other in battle!