The Sights of Pogradec

The Sights of Pogradec

The view from coming down from Qafe Thane mountain

There are three ways to drive to Pogradec. If you are travelling from Tirana, as soon as you reach the top of Qafe Thane mountain you will feel the fresh breeze and see the giant mirror of Lake Ohrid stretched out below like a piece of sky. You can see why its ancient name was Lychnidas, the Lake of Light.From the south, you access Pogradec by coming down the Qafe Plloçe hill through Zervaske and Remenj villages with their fields of cherries and apples trees, and 10 minutes later you are right in the city center.To the southeast is the Albanian-Macedonian border crossing of St. Naum. You cross along the lakeshore by the Tushemisht village with its many water sources that crisscross gardens and yards like miniature rivers.

Pogradec is old. The first traces of human habitation date back to the early Neolithic period (8000 BCE), and its name first appears in writing in Ottoman registers in 1394. Pogradec is also new—many of the buildings in Pogradec were rebuilt after an earthquake destroyed much of the old city in 1911. You can see both sides of the city—the ancient and the new-- if you look carefully. 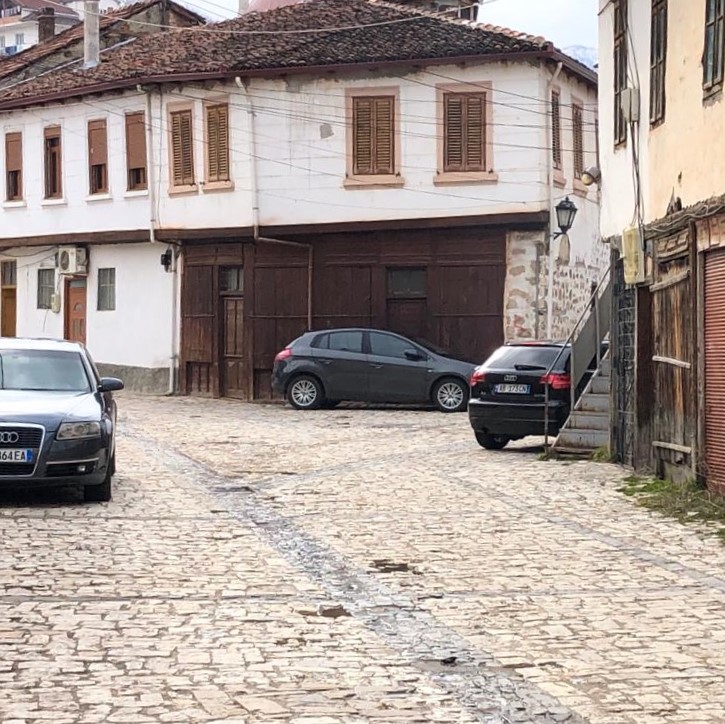 The Mburimat (“Eight Sources”) Quarter of the old city is named for its abundant natural springs. My family has a connection to this neighborhood, which was largely reconstructed after the 1911 earthquake. My great-grandfather had been living in Romania, where he learned carpentry and woodworking. He returned after the earthquake and rebuilt the family house in a traditional Albanian style, with deep foundations, a ground floor built with thick stone walls, an overhanging wooden second floor, and (usually) at least one garret. Today, the house he built is part of an Albanian Cultural Monument. 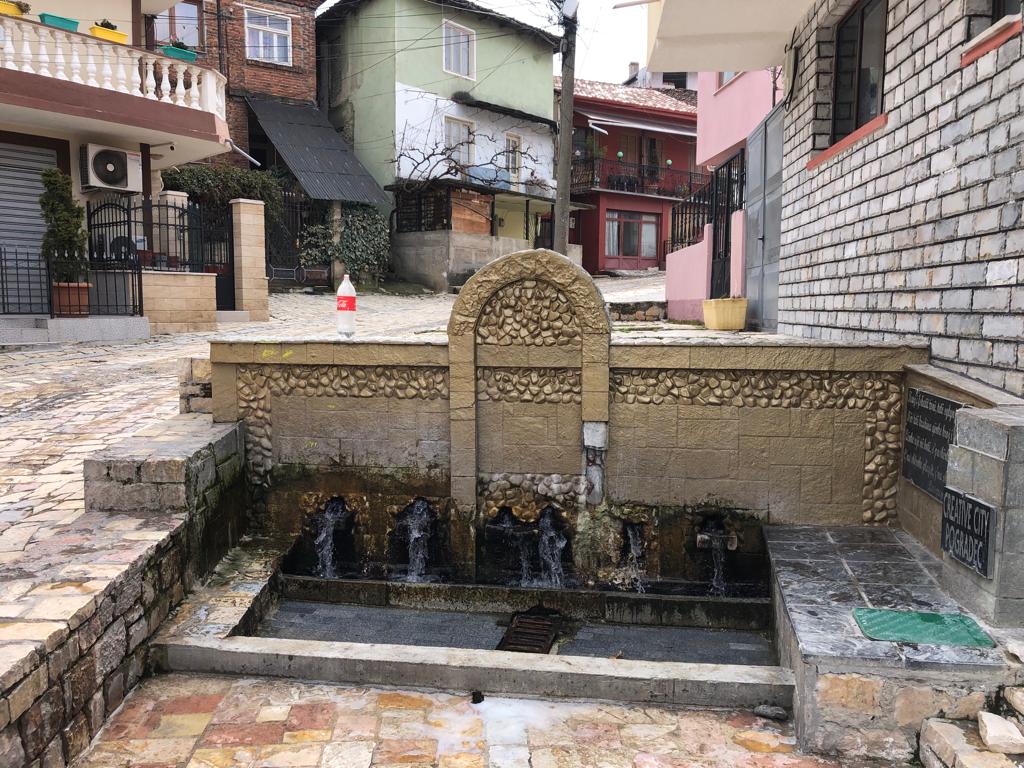 Spring in the Mburimat Quarter. The black plaque to the right of the water is a quote from Poradeci's poem.

In my grandmother’s day, people got their drinking water from Mburima spring and brought their laundry to the spring to wash. Today, a plaque at the spring excerpts one of Lasgush Poradeci’s famous poems, “Fountain of our Village.” A small gallery, Phototheque Cici,” displays pictures from one of the first photographers of Pogradec. Misto Cici bought his camera from an emigree who had returned from America in the 1920s and used it to document life in his town. 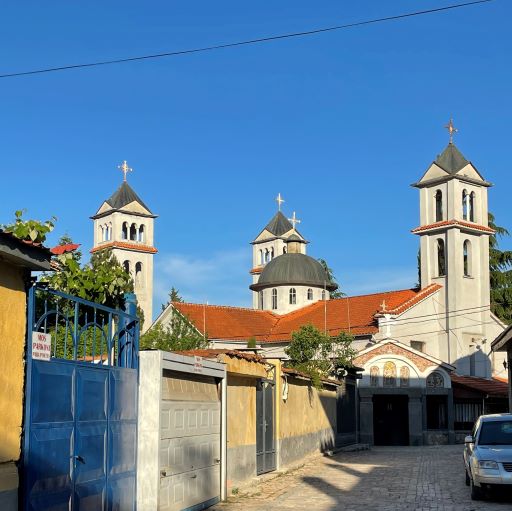 Church of the Dormition of St. Mary, Pogradec

The adjacent Mehalla e Kishes (“Church Quarter”) was inhabited by Orthodox families even before the construction of the Church of the Dormition of Saint Mary in 1878. Adjacent to the church is a cypress tree that is 230 years old, 18 meters high, and has a trunk diameter of at least a meter.It is a designated Monument of Nature. Cypress trees are traditionally planted around Orthodox churches and graveyards, and this one has had remarkable longevity. A vibrant place of worship today, under the atheist communist regime the church was used as a warehouse for grain. 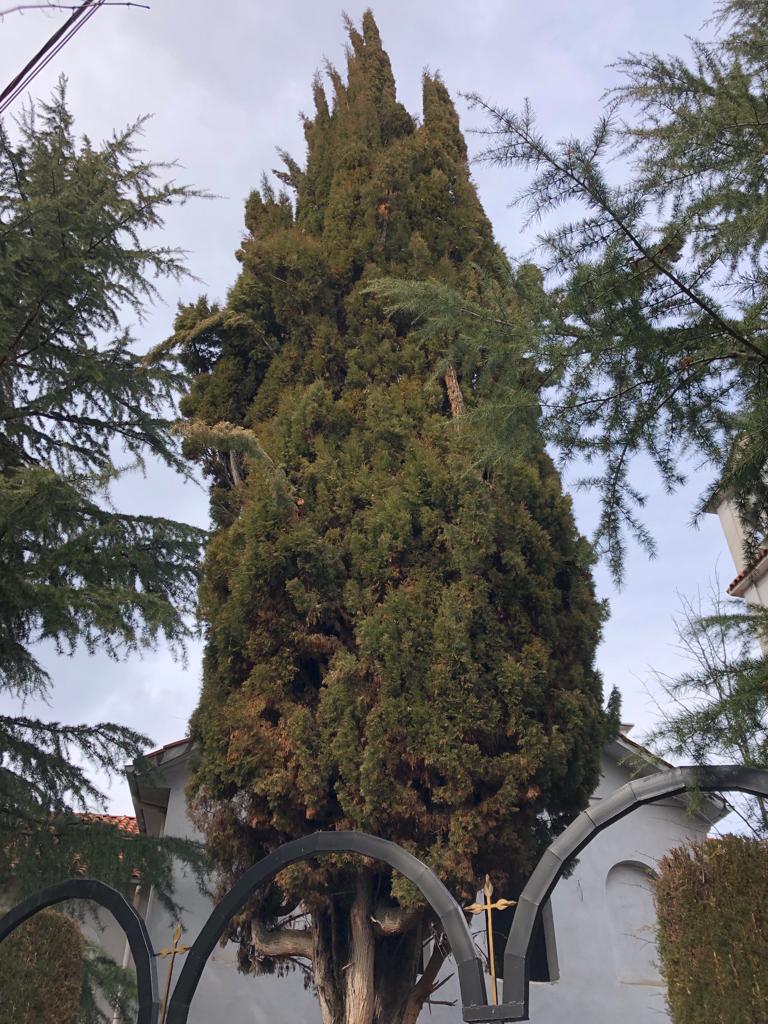 Cypress tree at the church, so big and old it is a Monument of Nature

Rruga Naim Frasheri, formerly known as the Old Gates Quarter, features narrow, cobbled streets that lead down to the lake, lined with traditional Albanian houses, businesses, and artists’ studios. The quarter gets its name from Ottoman times, when there were wooden gates at each end of the street that closed each night at sunset to protect residents from robberies and kidnappings. The gates are gone now, and residents can savor the varied blues of the waters of Lake Ohrid framed by the cobbled streets at all hours. This district is home to small craft confectioneries that make fresh Llokume me arra (Turkish Delight) and pastries (paste kokë) daily.